Over the next few weeks I'm going to publish a series on my search for a new (or newer) car with a manual transmission. While my quest has now all but come to its conclusion I want to share the experience from my search with others. At the end of this series I will share my final selection along with some personal images I'll be taking at delivery. This is mainly aimed at those folks who still appreciate the feeling of rowing the gears, understand the bond between human and machine that only a manual can offer, and recognize that the journey is often more important than the destination.


Saying Goodbye to a Different Kind Of Car

At 34 years old, I still drive the second car I've ever had, and the first car I've ever actually owned; a 99 Saturn SL. We've had the car for 14 years, just 4 days longer than my wife and I have been married. While it was our car originally, it became my car by default when we added a second vehicle to our household. Of the 149,000 miles on it now I probably drove somewhere around 148,900 of them. This car carried us on our honeymoon, through the entirety of my College/University Education, the birth of my children, 5 jobs and 3 career positions; from living in my in-laws basement through an apartment and two homes. I've had this car longer than I've known most of my closest friends. Needless to say, saying goodbye is going to be like saying goodbye to an old friend.

As cars go, our Saturn was pretty basic, and by comparison to the options available today it was positively archaic. Ours was the base model with Air Conditioning and NY emissions so it included the following features:


For me, the only point of real weakness here was the lack of power windows and locks; unless its a classic car I will never, ever, ever tolerate that on a car I own again.

The stereo situation was easily remedied with a couple of $30 speakers from Walmart and 30 minutes of installation effort (the wires were already there). For christmas my brother and sister bought us a trunk-mount cd changer which made our automotive sound system ready for the 21st century. After the CD changer wore out, I replaced the unit with an in-dash JVC system that allows for both aux and USB inputs. The new system even has a remote control just in case you are sitting in the trunk and can't quite reach the controls.

The manual steering always took a bit of effort in parking lots at low speed, but its one of those things you get used to. At anything above 5 miles/hour it feels sporty and greatly enhances the feel of the road and the connection with the car.

Probably one of my favorite features of the car, and one of the contributing factors to the longevity of my ownership, would be the manual transmission. When I first got the car I didn't actually know how to drive a manual transmission and this was the car that I learned on. The clutch has always been forgiving, and while I stalled it a lot those first couple weeks, I never found myself frustrated or wishing for the automatic version.

While I've driven more refined transmissions (BMW, Mazda) the shift is sporty with a solid feel. Combined with the relative low weight the car can leap off the line. The manual transmission also returned a class leading 30/40 fuel economy something that is just recently being eclipsed by more modern alternatives. My average fuel economy used to hover around 38MPG in combined driving with a peak of 44MPG on a trip to Cleveland. In the past few years that has dropped closer to 32MPG mainly due to the introduction and expansion of ethanol fuel additives.

Saturn's had a real inconsistent reputation throughout their history; in fact, my wife had an L200 that we were relieved when the lease was over and we were able to turn it in. That said, the SL series' built from 97 to 03 had an excellent reputation. A lot of them are still on the road today and that can't said for the Ford Escorts, Dodge Neons, and Chevy Cavaliers of the same era. I've had to do so little maintenance that I can actually provide the full list right here:
The great majority of this work I was able to do by myself and I'm entirely convinced that this would be the car that MacGyver would own. 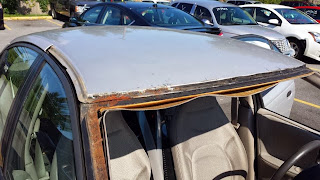 In June I needed to have the windshield replaced due to a crack running from the drivers side. When the old windshield was removed they found that the prior installation (2004) had been done poorly and the frame on the A-pillar had some rust infiltration. Initially it appeared that the work necessary to correct this would probably easily exceed the value of the car. The glass company was able to identify a body shop where the necessary work could be done and they handled the repair under their warranty program for the original installation.

At this point we discussed the situation as a family. While the timing wasn't ideal we came to the conclusion that it was probably time to work on replacing my car. We realized that the car while still running well was probably going to need some money spent on it over the course of the next year including tires and rear brake drums. We also realized that this was just the stuff we knew about and that it was very likely that there would be more that was necessary. We didn't want to get into the slippery slope where the more you spend the longer you try to keep the car to get the value from your repairs.

What I'm Looking For

The features I'm looking for in order of importance are:
Other items will strongly weight my final decision
The Saturn has always been a blast to drive, easy to maintain/repair, and cost effective to operate. Its one of my mother-in-law's favorite all time drives, and if she could get away with owning a smaller car, with all the grandkid toting she does, its a safe bet she'd be at the front of the line to take ownership of this next. Needless to say, the new car has some mighty big shoes to fill.

Having driven my car as long as I have its become a familiar and comfortable place for me. In fact, after the windshield repair I took my car out for a long drive as sort of a way to contemplate my decision and begin to say goodbye. I've decided that in consideration of all factors time is on my side for this search; since I plan to drive the new car for several years I'd better take the time to get it right.

As part of my journey I spent long hours online researching what my options were and was shocked by just how limited they are. Once I'd identified the options that fit my needs I took most of them for a drive and I captured my thoughts about each vehicle to share. I look forward to sharing my journey with you.

I recommend the Hyundai Elantra. We've had it close to one year now and have had no major issues (aside from the accident I was in). The mileage isn't as good as your Saturn, but depending on who drives it more, we get between 32-35mpg city regularly, and upward's of 45mpg highway. It comes equipped with remote keyless entry, and electric windows, trunk release, xm radio, CD player, am/FM radio. Transmission is six speed. We love the way the car drives and how the transmission handles! If you want, you are more than welcome to come over to take a look at and drive ours!

Subaru Impreza look nowhere else, 5 speed, sporty, you cannot beat the safety and with the new direct injection timing chain motor they are over 35mpg while still having AWD.