On June 8th of this year I started on a journey inspired by a Biggest Loser Contest sponsored by my Engine Yard, and supported by a relatively large group of brave coworkers on the same path. At the beginning of this journey at 5'10" I weighed in at 226 pounds, and running a quarter mile would have left me severely winded. Fast forward 4 months and -48 pounds, and tomorrow will mark my first non-stop running of a 5K (3.1 miles) in support of the Niagara Falls Firefighter Toy Drive.
employer

In retrospect I didn't appear to be particularly unhealthy by North American standards, but the reality is that by medical standards I was obese and it was getting worse. High cholesterol runs in my family, and my numbers were already poor 5 years ago, despite being 16 pounds lighter and in better physical condition. I regularly worried about whether I'd have an opportunity to know my grandchildren or if I'd even get to see my kids graduate from college. It was time for a change!

I had a couple bad habits that were significant contributors to my poor condition, the biggest contributor was my level of inactivity. I work from home in a suburban area, so there is less walking involved in my typical day than for most. Sure, I'd get out and do chores in the yard, play with the kids, or work around the house, but that activity probably averaged 3-4 hours per week and often wouldn't be enough to elevate my heart rate.

The second bad habit, which was really more of an addiction, was to sugary treats. Most days I'd drink at least one can of soda, and if we went out to dinner I'd probably have a second; oh, and don't forget about those free refills. Then there is dessert, which I'd manage to find on probably 5 of 7 nights per week; and no, I definitely wasn't following the serving size suggestion with ice cream (who does?). Breakfast, sometimes I did it right, sitting down with something like oatmeal or whole grain bread, but if the kids got Captain Crunch: Yum!

I had to start somewhere so my first step was to decommission our basement "coat rack" and turn it back into the elliptical it was always meant to be. I then created a 6-day workout spreadsheet centered around the elliptical. I started at 20 minutes per day and increased the length of the workout by 5 minutes each week. At this point Netflix from the iPad became my friend since it's remarkably easy to keep working out when your mind is distracted.

I started making smarter choices about what and how much I was eating. I'd make sure that at least half my plate was vegetables and avoid foods based around processed sugars. If I was eating something particularly high in fat (mmmm ribeye), I'd take a smaller portion, and save the rest for the next day’s lunch.

I started with some great success losing 9 pounds in the first week alone. It was a challenge to shift my diet, and I found that I often felt hungry or had cravings. The real success came when I started to actually pay attention to the calorie numbers and nutritional intake. I was able to add some healthy fats to my diet to help me feel full, and snack on things like roasted almonds to ward off cravings. I also noticed that there wasn't a lot of nutritional value in the carbohydrates I was eating, so I shifted to a low-carb diet for the last 5 weeks.

Around the end of June I discovered the Pacer App which has this cool concept of trying to hit a minimum goal of 10,000 steps every day. This drove me to add extra walking to my lunch hour or to close out the evening. While I was at it I added some upper body and core conditioning in the form of push-ups and crunches starting with three sets of five repetitions and expanding from there.

Towards the end of July, I was out for an evening walk, listening to Pandora when "Running on Empty" started playing:

What can I say besides "I just felt like running." I started jogging and didn't stop for about 10 minutes; at that moment a runner was born. The following day I downloaded Zen Labs C25K (Couch to 5k) app and changed up my workouts, alternating days between outdoor running and the elliptical.

I've already listed apps like Netflix, Pandora, Pacer, and C25K that helped with my journey. Other favorites include:


The other big help was the dedicated communication channel Engine Yard set up to connect all the participants in the biggest loser competition. This gave us a location for support and discussion about fitness and nutrition, and a place to get the necessary encouragement to keep going. The veterans who participated in the first round were especially helpful to rookies like me.

For breakfast I'm typically pretty consistent with 2 scrambled eggs, a piece of fruit, and a couple slices of peameal bacon (I've started making my own.) I sometimes skip the bacon or substitute another meat depending on the day. Occasionally, I have plain oatmeal instead with either cinnamon and raisins, or cinnamon with apples; for both, I sweeten with applesauce instead of sugar.

Lunch and dinner is often a mix of the same things, lunch often being whatever is left over from the previous night. Some of my newly discovered favorites include:


After a particularly intense workout I typically look for some protein in either a Kashi bar or Muscle Milk. I've also found that ¼ of a Hershey bar is just enough to help with the recovery without creating a craving or negatively impacting the diet for the entire day.

For the most part my diet is now all about moderation. The only thing I specifically avoid are things like breads and rolls (hamburger/hotdog). When you are counting calories and consider that a hamburger roll can be anywhere from 150-300 calories it has got to be a mighty special roll (*cough* Costanzos) before its worth eating.

On the rare occasions that we dine out I've found I can still maintain my diet (mostly.)

Where I am Today

I FEEL BETTER. I was unhealthy and tired, now I'm energetic and awake. I’m thinking more clearly than I can ever remember, and I have more stamina than I've ever had before. I took a resting pulse the other day and it was 47, with a blood pressure of 107/66.  I checked it twice just to be sure.

The work competition ended on July 31st, and I managed to beat my weight loss goal by getting down to 193 pounds. I also managed to win the competition with the greatest percentage of weight lost over eight weeks. I've now reached 178 pounds and wouldn't object to losing just a bit more, but I'm not losing sleep over it.

At this point my goal has changed and it's no longer about losing weight, it's about fitness and good health, and the ability to maintain that long term. My current goal is to be able to run a 7:30 5K, and a 8:30 10K, and to continue to improve my health through the long cold Buffalo winter and across the years to come. 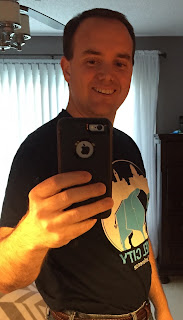